Tetracoil Double Voice Coil (TTC) technology is based on an innovative magnetic structure where two different inside-outside voice coils are wound on the same former and suspended evenly in the two magnetic gaps.

The key advantages are:
- Ideal motor symmetry over large displacement providing flat inductance and minimal even-order distortion.
- Excellent thermal dissipation and reduction of thermaldistortion resulting from: (a) twice the voice coil surface area of a standard single voice coil of the same diameter and, (b) reduced power compression for up to 50% more output at high power.

The Tetracoil technology can best be understood by reviewing the evolution of conventional loudspeaker motors. Traditional electro-dynamic loudspeakers incorporate a motor with single copper or aluminum voice coil immersed in a static magnetic field created by a dedicated permanent magnetic circuit. Due to current flowing in the voice-coil a Lorentz force will move the coil in a direction perpendicular to the magnetic field.
This conventional design is shown in Fig 1.
For many years (see fig. 2), single and multi-layer voice-coils have been wound on the outside layer of the voice-coil former. High power voice-coil formers made from polyamides or glass fiber effectively acts as a thermal insulation between the inner voice-coil layer and the motor pole piece. This thermal insulation reduces thermal radiation from the voice-coil to the steel parts.

To take advantage of voice-coil wire to steel intimacy, the ISV Interleaved Sandwich Voice coil technology has been used by Eighteen Sound since 19981. As shown in Figure 3 and Figure 4 the ISV voice-coil divides a single multi-layer voice-coil into two separate voice-coil segments by winding coil layers on both the inside and outside of the voice-coil former.

It is clear that the ISV coil doubles the direct surface area relation between voice-coil and steel plates, increasing thermal conductivity for improved transfer of heat from voice-coil to pole plate and front plate. 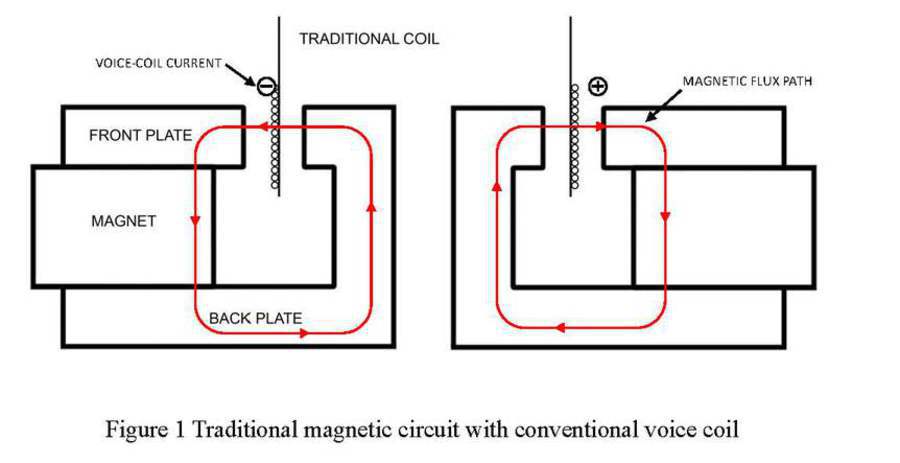 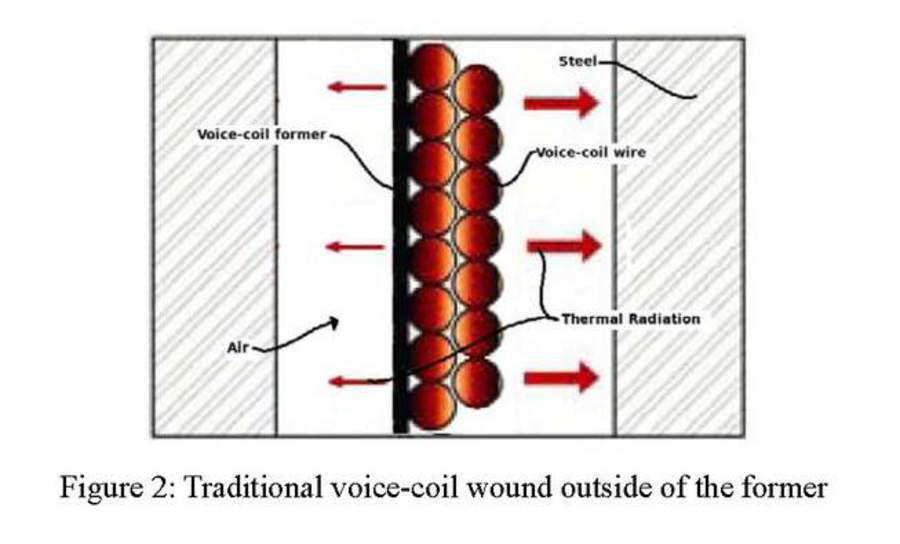 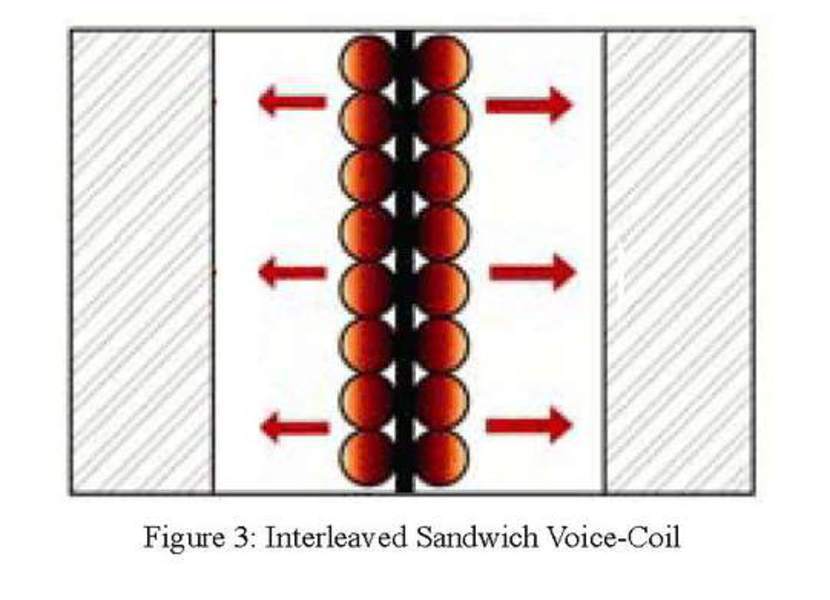 The Tetracoil technology extends the ISV principle into a dual gap motor structure. With two inner and two outer coils there are in effect four voice-coils, hence the name “Tetracoil”. The two Interleaved Sandwich Voice coils are wound on a single cylindrical voice coil former, suspended evenly in the two magnetic gaps as shown in Fig 5. 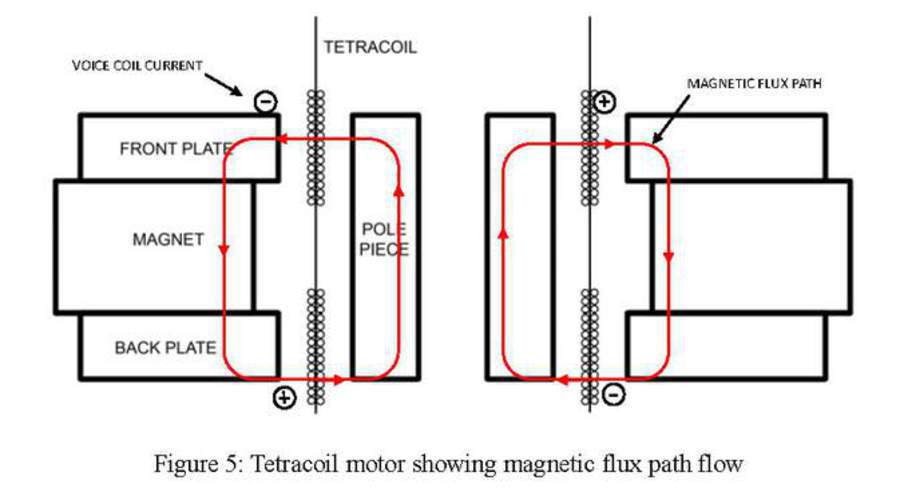 The first benefit provided by Tetracoil technology is the increase in thermal conductivity. As shown in Figure 5, each gap of the Tetracoil motor structure is equal to the gap of a traditional structure shown in Figure 4, however the area of direct thermal path is doubled, resulting in a reduction of thermal resistance. This leads to

As stated before, the magnetic circuit is perfectly symmetric in the horizontal plane. This leads to a perfectly symmetric flux density shape and since the coil is symmetric, as seen in Figure 7, the Bl factor will be symmetric as well, minimizing the even distortion usually caused by Bl (x) asymmetry and the DC component effect.

The motor symmetry creates a very symmetric and quite flat inductance curve as plotted against voice-coil excursion in Fig 9. When the cone moves up, the lower coil goes into the gap while the upper one leaves the gap. Consequently, the magnetic path "seen" by the whole coil is quite always the same, with constant inductance curve, in contrast with the inductance of a traditional magnetic circuit, Fig.10.

The benefit of a regular inductance with displacement is low reluctance force. This attraction force is described

so a high slope inductance will cause a DC component and second harmonic distortion. 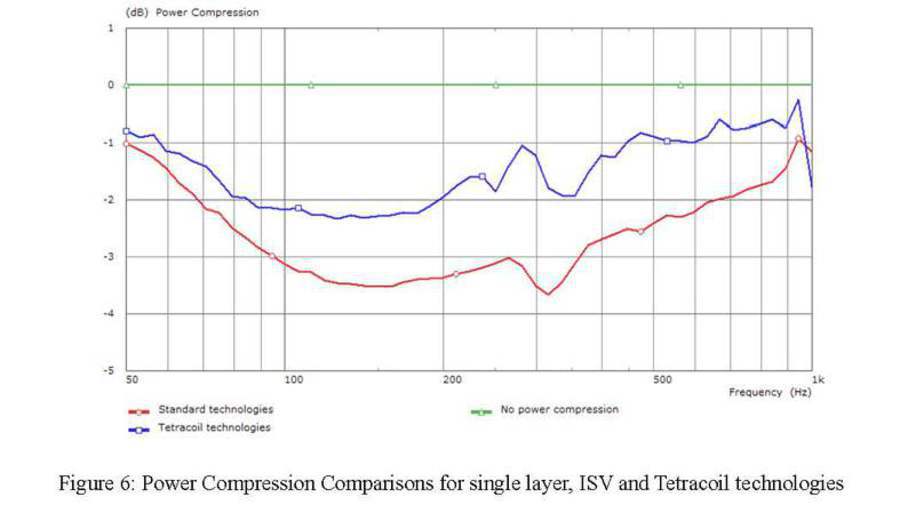 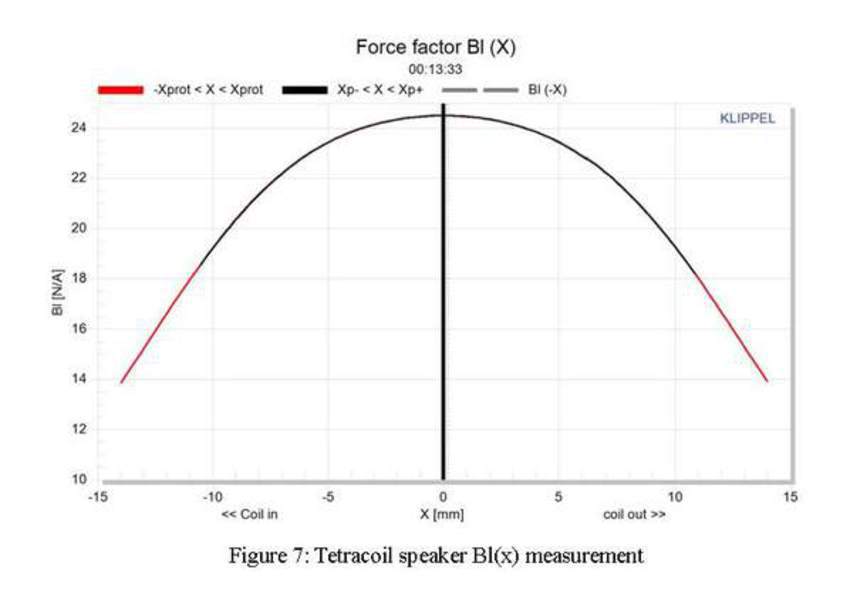 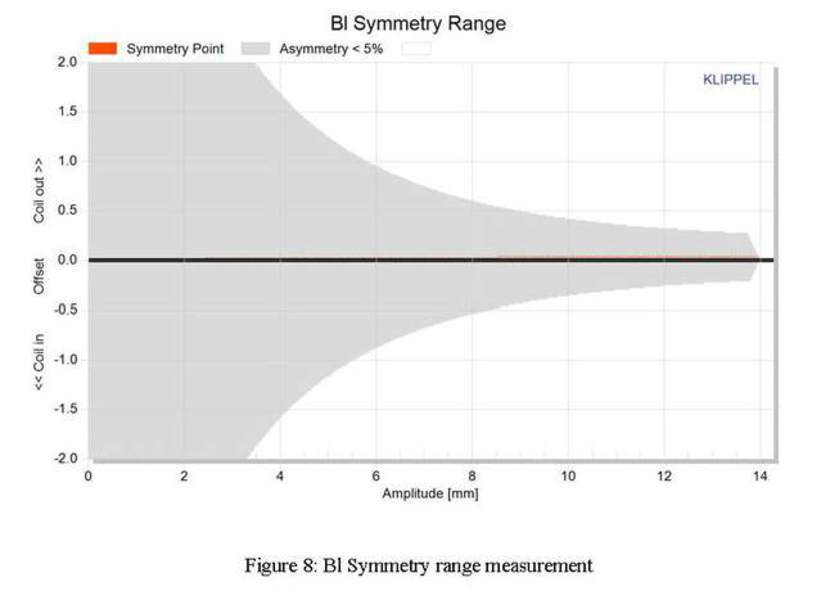 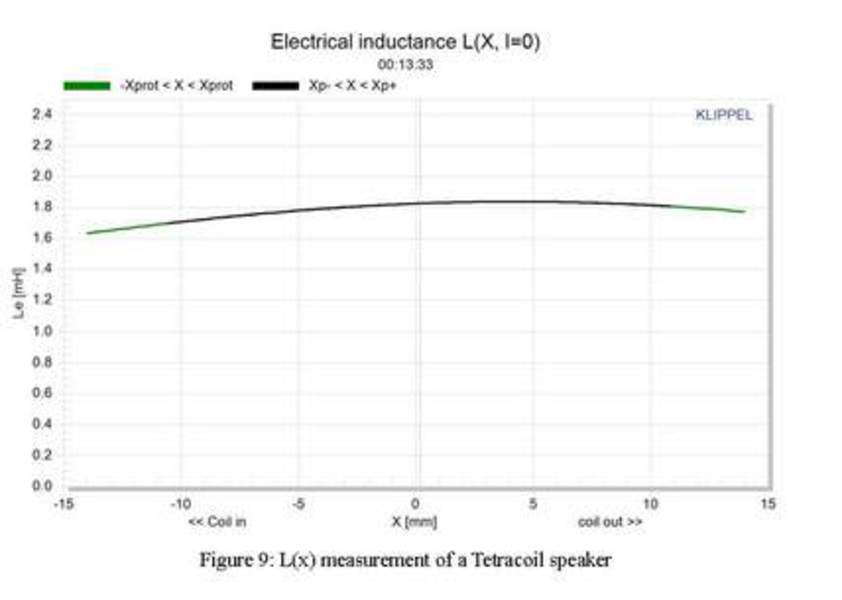 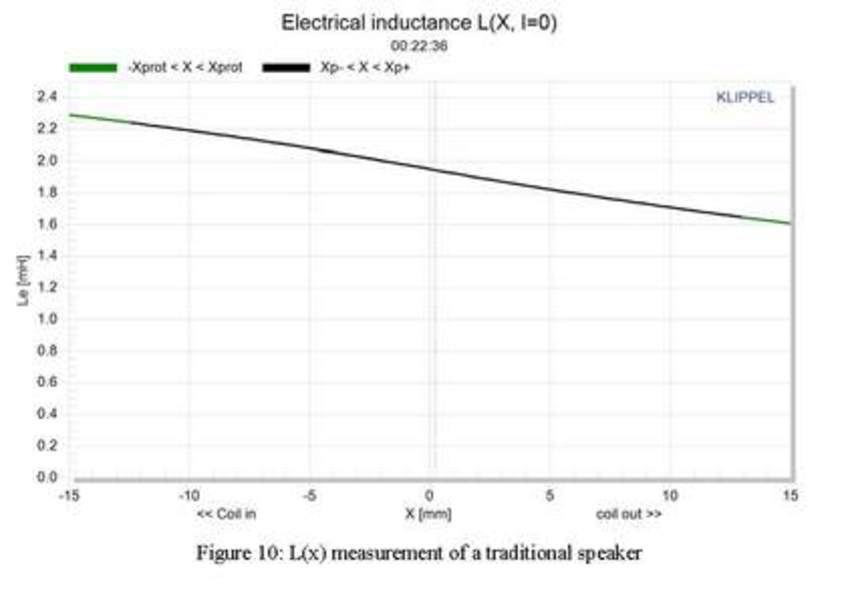 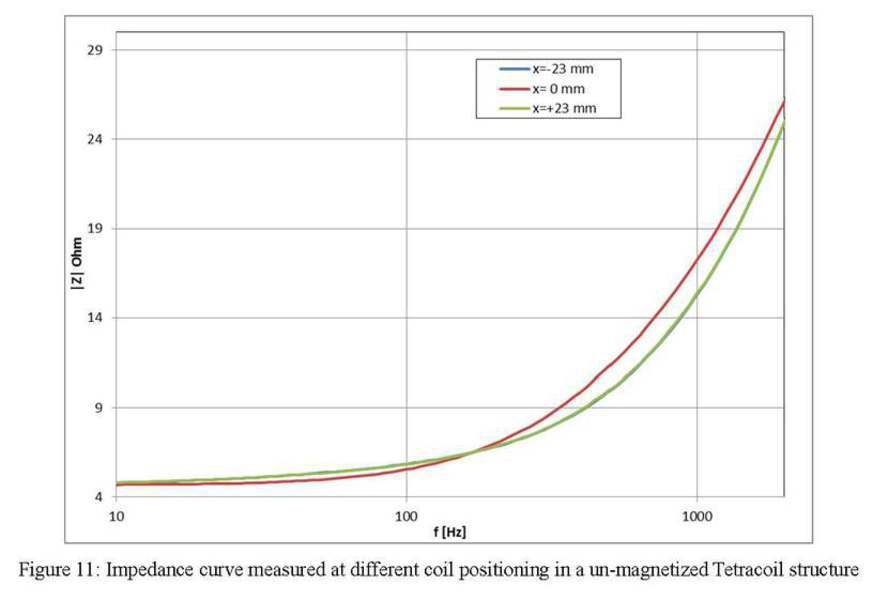 To summarize, for a given size and class of woofer, the Tetracoil motor will produce more acoustic output than traditional voice-coil drivers. The Tetracoil innovation is a unique blend of Eighteen Sound technologies: the dual gap motor structure with four voice-coils wound in an innovative manner increases the power handling and reduces power compression while balancing motor symmetry. Consequently, it has the great advantage of reducing the intrinsic distortions and DC component offsets caused by Bl(x) and L(x) asymmetry for extreme linear excursion with maximum low frequency SPL.